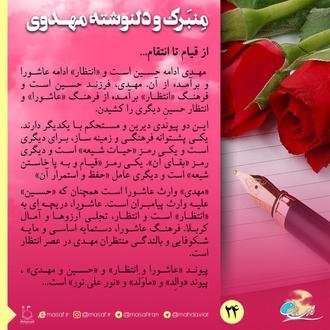 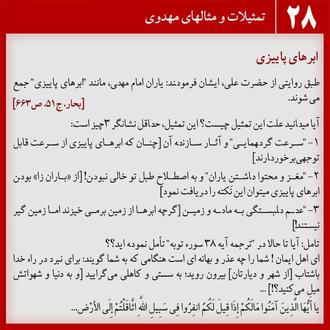 Mahdism miniSermons and heart to heart writings - The second series

Once, Allah intended to punish a nation. After a while, they observed no punishment given to them! And the situation is calm... The prophet of the nation asked Allah: “What is the truth?”

It was revealed: “Oh, My prophet! I didn’t know of a punishment as severe as taking the pleasure of praying to Myself out of the heart of the people.  And now, I have made them deal with this punishment and disaster.”

Oh, people! Nowadays, Allah’s greatest punishment and torture is the fact that the “memory of Imam Mahdi (PBUH) has no place in our hearts and people have forgotten their master...”

He, who has a lot of patience, comes. In order to suppress the oppressors, he has Imam Ali’s sword in his hands. He brings the Holy Quran to guide people. He reappears like a shining star in the darkest night and like a high mountain in a scary forest. He comes with Prophet Muhammad’s Quran in his chest, with Imam Ali’s sword in his hands, with Lady Fatimah’s kindness, with Imam Hassan’s patience and Imam Hussein’s bravery.

He is endowed with the features of Prophets and Wilaya. He possesses the characteristics of all the Prophets. He will predominate Islam in the whole world by his Reappearance. His rise is like the Resurrection, eliminating all the sins. His name eliminates all the oppressions. He is ultimately the one who punishes the infidels and finally the efforts and the mission of the prophets will eventuate. All Muslims are waiting for him. Oh Sir! When will you come? Reappear, people laugh at our anticipation.