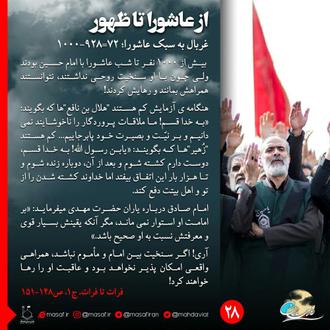 Imam Mahdi in the Quran - The fourth series

“(Inevitable) cometh (to pass) the Command of Allah: seek ye not then to hasten it… [The Quran, Surah16, Verse 1]”

Imam Sadiq (PBUH) says while interpreting this verse: “[the Command of Allah] is our command; implying the rise of “Qa'im” of Ahl al-Bayt, that Allah has ordered not to hasten it … Allah will support him with three armies of angels, believers and panic [among the enemies]…”

“The loud cry from the Heavens” in the Quran

Abd al-Rahman says: “I told Imam Sadiq (PBUH): “The enemies blame us and call us liars! We say “There will be two loud crys from the Heavens” They say: “When both are from the Heavens then how will be distinguished Truth from Falsehood?”” Imam said: “What did you say?” I said: “Nothing!” He said: “Tell them when the loud cry is yelled, whoever has believed in it before will confirm it; has the almighty Allah not said:””

“Is then He Who gives guidance to truth more worthy to be followed, or he who finds not guidance (himself) unless he is guided? What then is the matter with you? How judge ye?” [The Quran, Surah 10, Verse 35]

The Merciful Government of Imam Mahdi - The fourth series

Omission of luxuries and luxurism

A person came to Muawiyah and a tablecloth was spread before him that foods with any color were on it and he didn’t recognize one of them. He asked Muawiyah what was that food and he answered: “The stomach of duck filled with sheep’s brain, fried in pistachio oil and sprinkled with sugar.”

That person came to tears and said: “I recalled that I was with Ali (PBUH) at the time of Iftar (the time for breaking fast) and a sealed bag was brought for him. I asked: “What is in it and why is it sealed?” He said: “It is barley flour. I’m afraid Hassan or Hussain mix it with oil.”” *1

It is said in Seerah (the life history, behavior and habits) of Imam Mahdi (PBUH) in narrations that: “His cloths are not but rough (like battle outfit) and his food is not but coarse (barley bread).” *2

Note and elimination of misunderstanding: The concept of what was said about the Seerah of Ahl al-Bayt is not to avoid enjoying divine favours and the beauties of the world at all. But it is to avoid greed and pride to properties and luxurism and desire for the world.

The safety, after the Reappearance

While before Imam Mahdi’s Reappearance unsafety is prevalent all over the world, one of his most fundamental undertakings is restoring safety to the society. By subtle programming at that time, safety is shortly restored to the society in all fields, the kind of safety that humankind has never experienced before. Safety has different aspects that we mention three of them herein:

1- The road safety: So that young females can travel from places to places without a Mahram accompanying with them and they are safe.

2- The judicial safety: So that people are not afraid that there is a possibility of trampling their rights.

3- The financial safety: It is so widespread that if someone puts his hand in other’s pocket, it wouldn’t be considered theft.

There are narrations (Hadithes) for all the above cases, but for the sake of brevity, we are equally satisfied by what mentioned before.

Acquainting oneself with the Imam of each era - The fourth series

An enthusiastic letter from father

The confirmation of the news of Imam Mahdi’s (PBUH) birth

Ahmad bin Ishaq Qummi says: “When the pious successor (Imam Mahdi (PBUH)) was born, a letter came to my grandfather from my master, Imam Hassan Askari (PBUH) written “in his own handwriting” saying:

“A son has been born to us and this news should be kept to you and hidden from people; because we do not unveil this news to anyone except our “relatives” and “close associates”. We wanted to tell you this news so Allah makes you happy as He made us happy, and no more.””

One of the recommended traditions in the religion is to offer the infant’s Aqiqa (to sacrifice a sheep) that affects the baby’s health and blessing of his life. And by offering Imam Mahdi’s (PBUH) Aqiqa, Imam Hassan Askari (PBUH) informed many of Shias about his birth, meanwhile, performing this religious tradition.

When “Imam Mahdi (PBUH)” was born, Imam Hassan Askari (PBUH) told to Uthman ibn Saeed (the first Deputy): “Buy 10,000 rotl of bread (a unit of weight of the order of the pound) and 10,000 rotl of meat and distribute them (probably to Bani Hashim) and offer his Aqiqa of many sheeps.”

He had at least two important purposes: 1- The baby’s health. 2- Introducing the successor and “announcing the news of the Savior’s birth” to public specially oppressed people.

The branch of astragalus gummifer and birds in love

“There will be an occultation for Sahib al-Amr (Imam Mahdi) in which holding one’s religion likens removing the thorns of the tree of astragalus gummifer with one’s hands. People should seek refuge to God and hold on to their religions.” (Imam Sadiq [PBUH])

Yes, and also in such a situation:

“The hearts of the pure and pious people, like the birds which are fond of the tree, are eagerly waiting to meet you (Imam Mahdi).” Imam Hassan Askari (PBUH).

The tree of Astragalus gummifer is a big tree with thorns which look like sharp pins. In Arab literature, doing difficult and arduous tasks is likened to touching the thorns of this tree. For instance, tolerating a special condition by someone is like removing the thorns of this tree by moving one’s hand from top to bottom. It is obvious that doing such an action lacerates one’s hand.

Amir Al-Mu'minin said to his followers: “Be among the people like the “bee” among the birds. All the birds deem it weak and unworthy! But if they knew what there is in its interiors, they would not treat it so!”

Socialize with people on the surface and stay away from their viewpoints and doings, indeed every one will be rewarded according to his doings and will be gathered with the ones, whom he loves on the day of Resurrection.

You will not achive what you love and what you hope until … No one of you will keep on this matter except like the“kohl in an eye” or like the“salt in food”! {To be Imam Mahdi’s devotee, we have to fulfill Ahla Al-Bayt’s recommendations precisely till we are one of his devotees}

The duties of the awaiting people - The third series

Inviting people towards Imam Mahdi and making him known

One of the Imppeccable Imams said: “A scholar who teaches people their religious instructions and invites them towards their Imam, is better than seventy thousand worshippers.”

“(Our duty during the occultation is) inviting and guiding people towards Imam Mahdi and this is of the “most important” and the “most obligatory” worships.”

We should not make our master awaiting…

In Islamic narrations, believers are persuaded to express Ahl al-Bayts’ superiorities among people.

Imam Kazim (PBUH) said: “Indeed when two believers meet and mention Allah, then they mention our (the Ahl al-Bayt) superiorities, the flesh of the Devil’s face melts till his soul starts begging due to his agony.”

Imam Sajjad (PBUH) said: “The right of the person who does a kindly act to you is that you thank him and mention his kindness and propagate good words and points about him.”